Over the past three years, my housemate Ted has been acquiring more and more Lodge cast iron cookware. The collection has grown to about a dozen different pieces, from chicken fryer to wok. The latest addition is an obscure and extremely specific piece of cookware called a Danish æbelskiver pan.

The æbelskiver is a Danish desert which is akin to a pancake ball. Traditionally, they would include a little bit of apple (æbel) inside, but we did not attempt that for our first time out. Not too terribly sweet themselves, these light and deliciously buttery puffballs would go well with jam and powdered sugar. We skipped the jam and just used maple sugar. 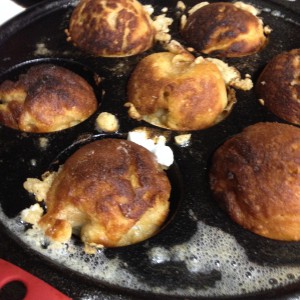 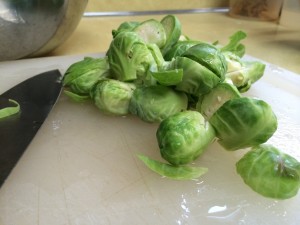 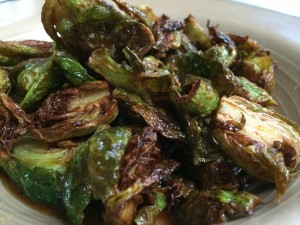 One of my absolute favorite “party foods” are potstickers, also known as gyoza or pork dumplings. These little snacks cook quickly, are a breeze to prepare, and are consumed like candy.

I suggest using a sheet pan to store the dumplings and a non-stick frying pan with a tight fitting lid for cooking. You can prepare a batch of dumplings ahead of time and cook them to order — and you really should, because these are best consumed right off the stove (and they usually don’t stay on a serving plate too long because they’re too tasty!).

I have very fond memories of this recipe. I’m not sure of its provenance, but my mother would cook it often and when the nutmeg was introduced into the pan, the scent would waft through the house and call the family to dinner.

Serve with Basmati rice. Also, a strong cheese could be mixed in at the end of cooking.

Originally found at Cooking for Engineers.